In an article published today in Nigeria’s The Nation newspaper, author Daniel Essiet profiled SRI and the related System of Crop Intensification (SCI) as leading examples of agroecological production methods that can help Nigeria achieve greater food security. The article focuses on how agroecological farming methodologies have the power to increase production without many of the negative effects witnessed by adoption of conventional/industrial agricultural practices, drawing links between human livelihoods, food security, ecological health, biodiversity, and sociocultural preservation.

The article points to SRI and SCI as key examples of agroecological production methods, and ones that are currently working on the ground in Nigeria to improve rural livelihoods, environmental protection, and food security. The National Crop Research Institute (NCRI) is also profiled for its work in implementing these two strategies, with quotes from Dr. Emmanuel Abo, the director of NCRI’s Research Operations Department, saying that while SRI and SCI use has not yet been scaled-up across the country, several seasons of initial trials have shown great results. 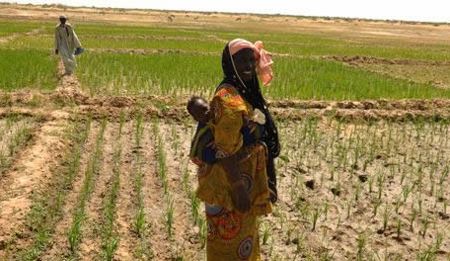 Dr. Abo is also now acting as the SRI Focal Point for Nigeria for the SRI West Africa project, where his role is to coordinate all project activities in the country, and monitor all non-project SRI activities as well.

In addition to NCRI, the article spoke as well about the involvement of the Green Sahel Agricultural and Rural Development Initiative (GSARDI), which after receiving training in SRI in Mali in 2010 from USAID’s Expanded-Agribusiness and Trade Promotion program (E-ATP), became a pioneer in introducing SRI to Nigeria. With further support from E-ATP, GSARDI held Nigeria’s first large SRI training in Jigawa State in July 2011. Muhammad Ahmed Adamu, the Executive Director of GSARDI, has been instrumental in advancing the promotion and adaptation of SRI in northern Nigeria, and is an official SRI Champion for the SRI West Africa project.

Another mention in the article was the World Bank’s CADP project, active in five states across the country, which has been promoting SRI in Kano as part of a broader value chain and infrastructure approach. According to the project’s Team Leader, Dr. Lucas Akapa, SRI has been responsible for raising average farmer yields from 2.7 to 3.6 t/ha.

For a PDF version of the article in The Nation, click here. More information about the System of Crop Intensification (SCI) can be found here.

For more on SRI in Nigeria visit our country page. 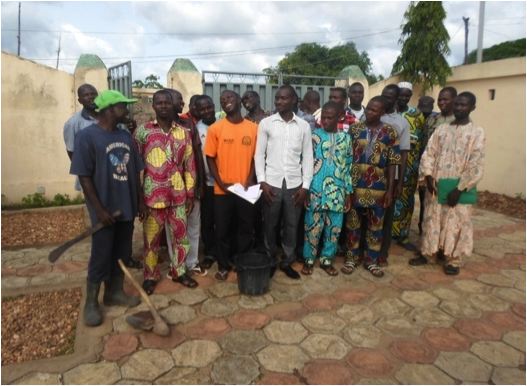 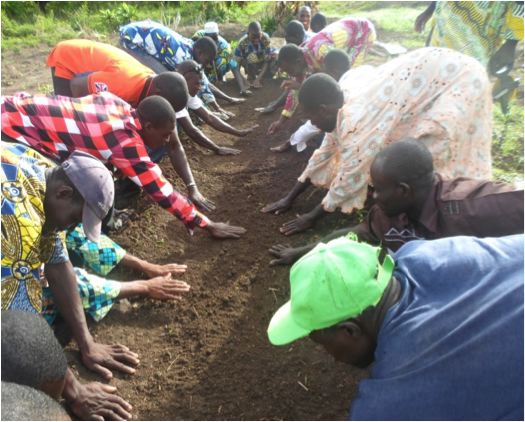 The first of these trainings—held May 6th-8th at the DEDRAS farm in Sirarou, just north of Parakou—was conceived as a follow-up to last year’s trainings, and included a one day field tour to answer questions and provide technical support to farmers who had tried out SRI the previous season. In all, 48 farmers received training, 21 of which had previously been trained, and 2 new trainers were trained in SRI. In the second training—held May 8th-10th at the DEDRAS compound in Djougou—23 farmers and 4 extension agents/trainers were trained.

The reports for both trainings, along with other project documents from Benin, are available here.

President of Liberia and Nobel Peace Prize recipient, Ellen Johnson-Sirleaf, was on hand to commemorate the Liberia’s first National SRI Field Day, kicking off a three-day harvest celebration of SRI-produced Nerica L-19 rice at the Community of Hope Agricultural Project’s (CHAP) farm located on the outskirts of Monrovia. Speaking to the crowd, President Johnson-Sirleaf, herself a farmer, stressed the importance of farmers to the nation’s food security, and praised both CHAP’s work and the SRI methodology.

CHAP’s President, Robert Bimba, was also on hand to lead the events, meet with the President, and guide the delegation on a tour of the site. Robert Bimba and CHAP have been instrumental in the introduction and spread of SRI in Liberia, having conducted the first national SRI training in December, with participants coming from every county in the country.

As the National Facilitator (NF) for SRI activities in Liberia under the WAAPP, Bimba has an important role to play in boosting the country’s rice production, and is setting the bar high for his peers in other countries. Even though Liberia was originally considered in the third–or least established–group of SRI practicing countries in the region, his work with CHAP is quickly changing this. 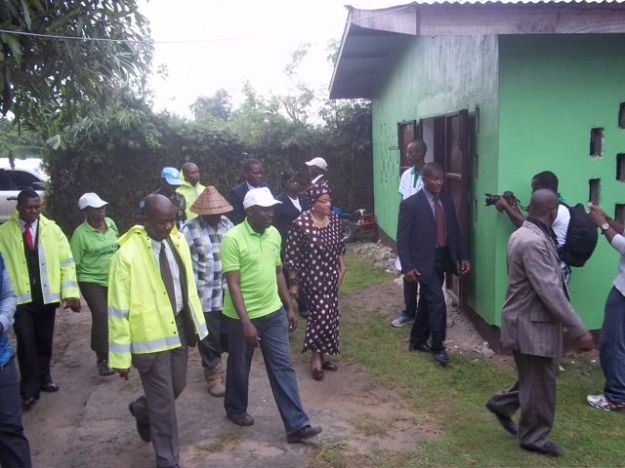 During the field day, enthusiasm and support for CHAP’s work was abundant, coming not only from President Johnson-Sirleaf, but also from Dr. Florence Chenoweth, Liberia’s Agriculture Minister, Henry B. Fahnbulleh, Montserrado County District No. 4 Representative, and a representative of the WAAPP.

The President lauded CHAP for following through on its vision, saying “CHAP has been doing this year after year, so let’s commend them for that.” Similar praise came from Dr. Chenoweth, who said that while CHAP and their collaboration with the Ministry have been a notable success, but cautioned that more still needs to be done.

Local government officials, such as Representative Fahnbulleh, pledged their support for creating a favorable policy climate for innovative agriculture like the kind practiced—and taught—by CHAP.

According to a story published by Liberian news agency FrontPageAfrica:

“A representative of the West Africa Agriculture Productivity Program (WAAPP) assured CHAP of its support in all endeavors, saying, ‘Our intervention in Grand Gedeh and River Gee is not the end. We will support you in the western region, the eastern region and all of our counties of intervention.’

“WAAPP said it has a responsibility to provide leadership in areas where people’s lives will be enhanced and improved and agriculture is the surest way to ensure the stability of the country in food production.” 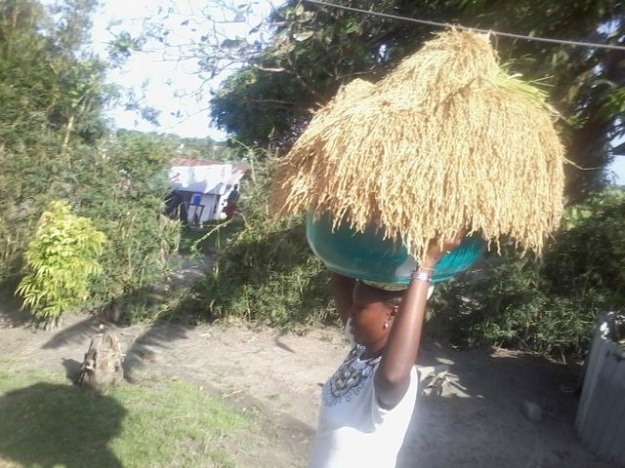 As the official technical partner for the project, Cornell University’s SRI International Network and Resources Center (SRI-Rice), based in Ithaca, NY, USA, is responsible for conducting periodic support visits to countries throughout the project region. In late February and early March SRI-Rice Director of Programs Dr. Erika Styger traveled to Liberia to gain a better understanding of the state of SRI there, and give counsel to WAAPP and rice sector officials. END_OF_DOCUMENT_TOKEN_TO_BE_REPLACED

As the official technical partner for the project, Cornell University’s SRI International Network and Resources Center (SRI-Rice), based in Ithaca, NY, USA, is responsible for conducting periodic support visits to countries throughout the project region. In early March SRI-Rice Technical Specialist Devon Jenkins traveled to southern Togo for a short two-day trip to meet with project partners and observe project activities. 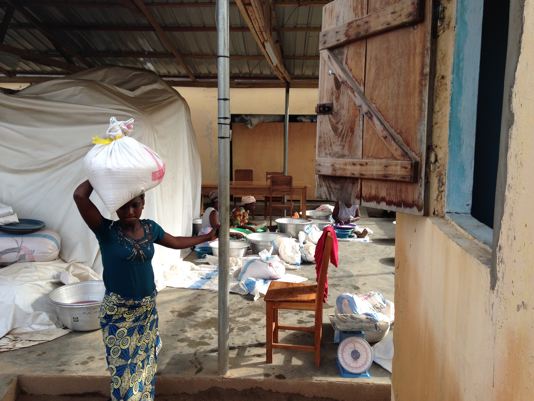 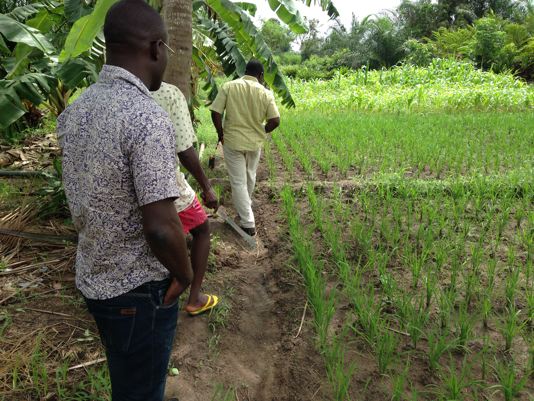 Highlights from Devon’s trip include:

A full list of SRI-Rice support trips and their reports are posted on the Project Documents page. The full report of this support trip is also available here.

Rev. Robert Bimba, the charismatic head of the Community of Hope Agriculture Project (CHAP) and national coordinator for the Farmer’s Union Network (FUN), realized immediately when visiting Burkina Faso in the summer of 2012 that SRI had the potential to transform his country. While rice is centrally important to Liberia’s livelihoods and cultural heritage,  production is low, and past efforts to change this have been met with limited success, at best. SRI, however, was different, and he knew this from the beginning. After one year of testing SRI on CHAP’s own plots, the organization has now conducted Liberia’s first national Training of Trainers (ToT), bringing together participants from every county in Liberia.

The national ToT, held from December 17th to 19th in Kakata City, Margibi County, brought together over 70 stakeholders, including representatives from the Ministry of Agriculture, and farmers from across the country. Now motived to train other farmers in their regions, the real work begins to adapt SRI’s principles into practices that respond well to various conditions found throughout the country.

Read the full report here, and find out more about SRI in Liberia on our country page. 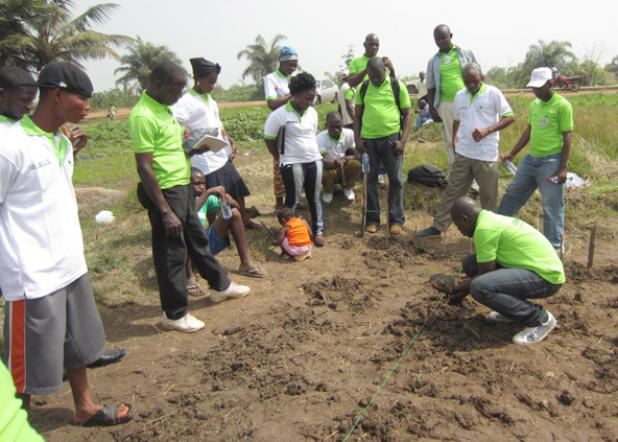 With the largest population in Africa, and rapid urban migration, Nigeria is one of the largest rice importers in the world, and indeed has become dependent on food imports across the board—a situation the federal government is keen to reverse. While the GoN has mandated that each state work to increase domestic food production, the World Bank has also stepped in, partnering with the Ministry of Agriculture and Water Resources to develop the Commercial Agriculture Development Project for Nigeria (CADP), a six-year, USD$ 185m project, expected to finish at the end of 2014. CADP’s Team Leader and Senior Operations Specialist for the World Bank, Lucas Akapa, spoke recently about the project’s successful inclusion of SRI in Nigeria’s northern state of Kano, saying that adoption of SRI in the area has been a key part of helping raise yields throughout the region.

The CADP is active in five Nigerian states (Cross River, Enugu, Kaduna, Kano and Lagos), and covers two major components: agricultural production and commercialization, and rural infrastructure. According to their website, CADP’s objective is to “strengthen agricultural production systems and facilitate access to market for targeted value chains among small and medium scale commercial farmers in the five participating states. These value chains are rice, oil palm, cocoa, fruit trees, poultry production, aquaculture and dairy, with maize and rice as staples.” More information on the CADP can be found on the World Bank website, or on the CADP’s own project site.

For more information about SRI in Nigeria, visit our country page.

This regional SRI project is part of the West Africa Agricultural Productivity Program (WAAPP). This site is administered by Cornell University's SRI International Network and Resources Center (SRI-Rice) in collaboration with Mali's CNS-Riz, who together form the regional coordination unit for the project.